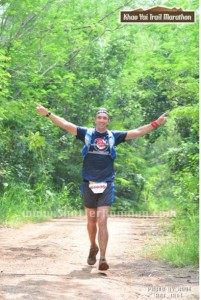 Three weeks after the epic vietnam mountain marathon with a few weeks of R&R, I have arrived in Thailand and had a go at the second run for the trip: the Khao Yai trail marathon. Khao Yai National Park is around 2.5 hours north east of Bangkok and is  one of the first national parks to be designated as a UNESCO listed heritage area. A few days before the race I took a tour involving a drive through the park, some trekking where I tried to spot various animals including gibbons, monkeys, scorpions, tigers, and out  a little farther to find wild elephants! We did manage to spot some wildlife, however the torrential downpours weren’t creating the most attractive environment for the animals or hikers to be in! Despite that, we did come across a family of elephants who at first were nonplussed but quickly became a little more defensive of their baby as they crossed the road behind our vehicle. We even got charged by one of them which was a bit of a rush! Nevertheless, an amazing experience to see them in the wild. 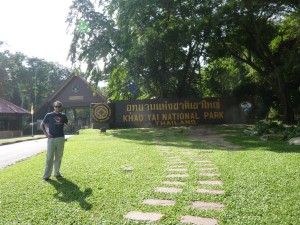 The few days I had in the area led me to believe that the weather on race day could involve anything. The forecast looked inviting: 23 degrees at 93% humidity at race start (6am) changing to 30 degrees and 75% humidity by 11am, a time I thought I may be finished/finishing. So, either cool and humid or hot and a little less humid. Excellent options! This was the inaugural Khao Yai trail marathon, however the North Face Thailand event is run in the same area around 15km up the road. The organisers were very happy as they had around 1000 participants across the 3.5/10/21/42km distances. There were around 170 marathon starters and 140 finishers. The run course was at the foothills of the national park and the description as “mostly flat” by organisers may have been a bit generous! Whilst running, the course reminded me of the rolling hills of Kew Blvd we do often in Melbourne – just add slippery clay, rocks, overgrown spikey plants and mud. Fun for all! Even more impressive was the additional 1.8km that we ran at the beginning due to no Marshal or signage on the very first corner. I knew the extra km would definitely make getting to that finish line before it heats up that much harder! Unlike the Vietnam run, the majority of participants were locals here. To my astonishment many were running in leggings and long sleeved tops. Maybe they are just too accustomed to the weather here and a lazy 44km is no bother! Some organisers suggested it’s either a cultural thing or being SunSmart. Either way, it was a little demoralising at times seeing these guys pass me barely sweating and all wrapped up!

I did get running and chatting to a Frenchman named Arnaud who was built like a brick and I thought i might not be the biggest, most out of place person here! Success. He was coming to Thailand just for this run however hadn’t trained much since a longer mountain run he completed in August in France and was concerned the course might be too flat as he preferred hills. He was also generous enough to send me some photos (as I may have packed my camera without the battery in it!). We stuck together mostly up until the turn around mark at 26km when he left me as I was starting to struggle with what is becoming a familiar issue of left hip, knee and calf soreness. No doubt this issue stems back to an identified left glute weakness and I should’ve been more contientious in actually doing the exercises set for me by my osteo at the time (a year ago)! While I battled this discomfort for most of the return (the course was out and back layout) the most frustrating feeling for me was every time I got into a nice cruisy rhythm, I’d be stopped by a big pile of mud that required either navigating around or tramping through. With every stop, my left side felt like seizing up a little and took a while to get back into the motions again. I did ask myself “why am I doing this?” And “is this fun any more?”. Honestly, I didn’t answer those questions during the run.

Needless to say, I wasn’t in a super positive mind frame for the last half of the run. I guess if you do enough long runs, some aren’t going to turn out as you would like them to. Bottom line is the race took 5:32 and I finished in around 45th place. I have an extra two weeks off now, 5 in total, before the Bagan Temple marathon in Burma which will be well used. The most important event (and my excuse for being here!) is in 4 weeks, Kathryn and Lucas’ wedding in Cambodia, which will no doubt guarantee more perfect marathon running preparations 🙂 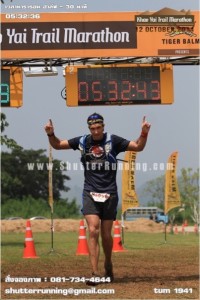 About the Author: Steve Jacobs