The second year of the RLC Marathon Leaderboard has just finished up and in celebration we’d like to congratulate our winner last year with flights to Doha to participate in the 100km World Championships. We’d like to share her story with you here… 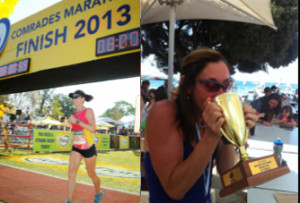 I dared to dream.

My journey to the 100km World Championships began on the 28th October 2012 at the Quokka Arms on Rottnest Island, a gorgeous little island a short ferry ride from Fremantle in Western Australia. I had just run and won the annual Rottnest Marathon, and my Mum who also ran (aged 59!) were enjoying a celebratory beer with many fellow runners.

That day my friend and fellow ultra runner Kate, who had followed my progress earlier in 2012 at Comrades, told me that my result indicated that running 100km under 9 hours and that racing for Australia at the World 100km Championships was a possibility.  As it happened, Mick Francis a selector for the Australian Ultra Runners Association (AURA) (who had also achieved a significant milestone himself that day running his 100th marathon) also encouraged me to attempt this feat.

In January 2013 I found myself in Canberra participating in the National 100km Championships that year held as part of the Stromlo Running Festival. It was my first attempt at 100km and it was a night event, starting at dusk. I ran 100km that night in 9 hour 31 minutes, which was outside the qualifying standard. Not to be discouraged I had planned to go back to Comrades for the up run and the coveted back to back medal and was hopeful that a good result there would be enough to gain selection.

My preparation for the Comrades Marathon included a 12 day trip to the USA, New York and Boston in April for the 2013 Boston Marathon with some girlfriends.

That year our celebration of completing the Boston Marathon was stifled by bombs, which we heard from our hotel room one block away. Locked down in our hotel we joined hundreds of shocked others in the bar glued to the tv screens trying to see what was happening. We were worried sick about our friend Elise who was still out on the course – thankfully she no where near the finish at the time of the blasts. We were within minutes of joining the crowds at the finish line that afternoon. We found momentary joy when we finally heard she was okay and safely locked down in another hotel not far away with some newfound friends. There were tears of joy when she was finally back with us a few hours later. That was one of the hardest moments I have shared with my friends, but no doubt brought us closer together.

Six weeks later I traveled to South Africa for Comrades. It was unusually warm conditions and a strong hot headwind. I completed the “Up Run” in 8 hours 01 minute, and was the 21st female in one of the most competitive ultras in the world. It was recognized by AURA selectors that my Comrades was an outstanding result but this and my one attempt at the full 100km was not enough to gain selection.  It was concluded that the most convenient event in which to prove my fitness for qualification was to run 100km as part of the 12 hour event at Caboolture on the 20th July 2013. I entered the 12 hour event at Caboolture somewhat reluctantly and it was mentioned that I would run the 100km and then probably stop.

Although I did not feel I was rested enough for this race I kept reminding myself I had put in the kilometres. I ended up crossing the timing map for 200 laps (100km) in 8:53:11.11.  I stopped running and started walking. Mission was accomplished and then I heard the words I wanted to hear: ‘you can consider yourself selected’ and then ‘no pressure but if you’re feeling okay your age record is 112.225 For 12 hours and you will be able to walk that, it’s up to you’.  Then someone said you might not have done 100km you had better run another lap just in case so I started running again. So I finished with a total of 123.188km and I won!

I started out seeking simply to qualify to represent Australia at the World 100km Championships but along the way I picked up an Australian Record, several Australian Age Records (W40), achieved a qualification for the World 24 Hour Championships, experienced the joy and then terror in Boston, experienced some really tough conditions at Comrades, proved I can also be competitive on trails at the TNF100 mixing it with some of the best ultra runners in the world, and assisted in raising over $12,000 for Oxfam in the mean time. The best part of this experience has been meeting new people and forging new friendships and not to exclude all the good and bad realities you get as an ultra runner.

My husband’s job relocated the family to Brisbane so I have been out of work, which has given me more time to run and spend quality time with my children. However, my travel budget is significantly smaller. Without this support I could not really justify participating in the 100km World Championships in Doha and the 24 Hour World Championships scheduled to be held in Turin, Italy in April 2015 so for that I am extremely grateful to Tristan and Run Like Crazy for providing me flights and the opportunity to chase my dream.

GOOD LUCK JODIE!! WE BELIEVE IN YOU!! 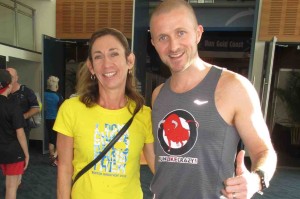