Looking forward this weekend to the Botanic to Bridge. I was asked along as a Race Ambassador, though as a first time ambassador for anything away from my local cafe, where I spruik for free lattés, I didn’t really know what I was going to do. 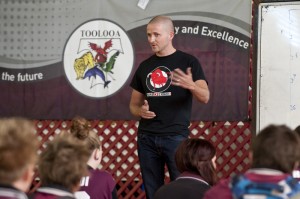 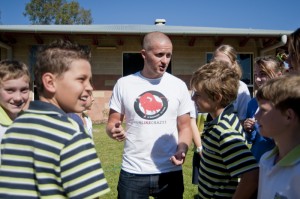 I went to Gladstone two weeks ago and I was excited to meet the lovely people from the Gladstone Ports Corporation. They picked me up and took me to a variety of schools in the area to encourage the kids along to the race. There’s a 3km component for the little tackers and their Mums, or anyone that just wants a good walk through town.

Then there’s the 8km version which runs from the Botanic Gardens on the edge of town, up a hill that will break at least half the field in the first 500m, then a trot through town to finish by crossing the Bridge to the ports area. At the finish is a healthy living expo. The race has been going for 3 years and it seems it’s already becoming something of a fixture on the town’s calendar. And that’s saying something in a town where you can witness firsthand the extent of Australia’s mining BOOOOOM! 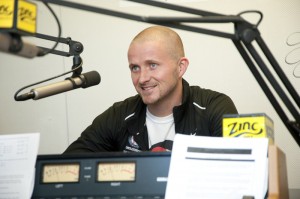 Everywhere you look, people are getting around in those bright orange visibility vests. They’re rushing about, dodging between utes and trucks, building new refineries for the LPG industry and a new coal transfer station to boot. We came away from the docks in the evening after a jog with the Gladstone Road Runners and were almost swamped by the huge number of worker ants rolling off the ferries that return from Curtis Island in the evening. They’re building 3 refineries out there… all at once!

With this new found wealth, long hours and hard yakka, the town has a few problems to deal with. Not only has the population exploded, but there are many dangers coming from poor diet (too much drink) and lack of physical fitness (too much drink). This is bringing a spike in the levels of heart disease and diabetes in the population that are reflective of what is happening all around the world. People working too hard, not looking after themselves in their down time, and hence inviting any number of health issues into their future. Not just for themselves, but for their families.. It’s a cultural shift.

So, the Gladstone Ports Corporation would like people to get fitter.  And they’re not just telling them about it, they’re giving them a fantastic opportunity to do it too! They’ve created a race that’s accessible and exciting, that gets airplay in the local radio and the newspapers and that has a purse big enough to encourage runners from Brisbane, Sydney and even little old me from Melbourne to come up and have a go. Yes, this race is heating up! 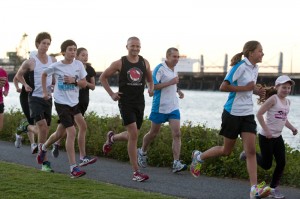 You can imagine how I felt when I got to this boom town and saw how much was happening. And I was now at the centre of an exciting initiative to change the culture of this city. They’re challenging their people, the way I challenge myself every day. They want them to lift every week and get passionate about their health, their jobs, their lifestyles and most of all their children!

So at each school, I told these kids about my exciting adventures. I explained how I was far from being a good runner at school, but that doesn’t mean you don’t pick up the gauntlet and rise to the challenge. I told those kids and teenagers that they can achieve absolutely anything if they can at least start with challenging themselves to do something as simple, though daunting, as a local fun run. In doing so, they create a template for success, a benchmark in their young lives that will allow them to connect the dots between “having a go” and “success in life”!

I can’t wait to get back up there this weekend. There’s going to be some 4000 runners out having a trot in the sunshine. I love a street party and this is exactly what we’re going to have!

Come run with me this Sunday – 8am – Botanic Gardens in Gladstone. To register, just jump online here: 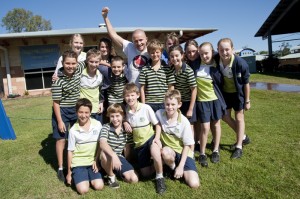