Today was a good, good day. This was the 96th day of the best year of my life… They’re not all this good, but it reminded me that many special treats await me in the days and months to come.

It has only been 3 days since I struggled to get through the hills of the 56km Two Oceans Marathon. It was a tough race and I struggled to live up to my own expectations, with a stomach bug that played chaos with my plans. I’ve had a couple of days getting around, seeing the sites, spending some time with the Wimbledon Windmilers Crew – Abby, Paula, Judes and Mike. It was a lot of fun, but I was pretty worn out from Saturday’s efforts.

Today, I took it easy. I started my Two Oceans Report, caught up on a lot of emails and work related stuff. I got the sweet article from the local paper scanned, so I can share it with you tomorrow. I even went shopping and finally found some rad jeans and shoes to replace the destroyed stuff I’ve been dragging around for months.

I had a conversation with Daz that went something like this:

I walk onto patio and sit down..

TB – Well, it’ll take a week or so for you to get there, surf and get back, so you’ll prob wanna skip Paris and meet me there..

TB – (…) Well, the country’s on the other side of Africa and a little north… Hang on… You mean Muizenberg Beach?

Later I heard that the wind had died down and it might be possible to get to the top of Table Mountain. I’d been wanting to have a stab at running up it all week. So I thought, now or never!

It’s about 1000m high. The run from my hostel to the cable car was pretty steep, but only 3kms. I ran there pretty well, wearing my Vibrams, because I knew I’d be up on my toes anyway. I was roasted by the time I got there, but rewarded with some amazing views. I’d been told if I wanted to keep running to the top, then it would take about an hour and a half, but I only had 45 minutes if I was to make the last cable car down.

I ran to Platteklip Gorge, which is supposedly a staircase that takes you to the top on the far side of the Table. When I got there, I was a little concerned to find a string of large rocks, emulating a staircase. I progressed quickly… for about 2 minutes. Then I struggled for a while and tried not to slip on the rocks. I was rapt to have my Vibrams on, because I could step lightly on the boulders and feel the sharp edges before applying all my weight. 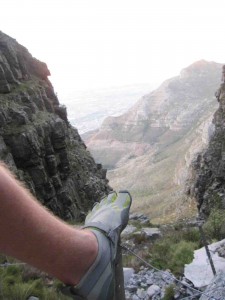 I passed a few walkers and each time I thought I was closer to the top, they would tell me I was more than half an hour away. I struggled again for a while. I looked back and I could see some amazing views of Cape Town, so it gave me a thrill and another wind to keep moving. I wanted to get to the top before the sun disappeared.

I pushed up the gorge, grabbing rocks with my hands and pulling as I darted left and right to get the right footing. 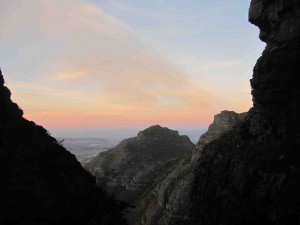 Finally, after 1 hour and 20 minutes total running, I found the top and emerged to see the sun setting on the far side.. A thing of beauty people… The oceans below glimmering in the final sunbeams of the day. The peaks of the nearby hills and mountains bright on one side and deep in shadow on the other. The lights of Cape Town were already beginning to flicker a little. I was so enamored by the scene below, I almost forgot that darkness was falling.. 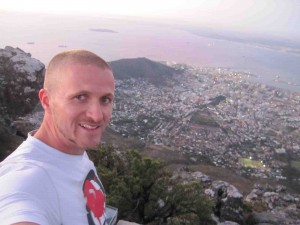 I shot a quick vid and skipped along the path to find the cable car station. I figured that even though I’d missed the last cable car, maybe some there could be someone there who could direct me to a softer run down. The last car was late leaving, so the boys there shouted, “It’s your lucky day pal, get on quick!”

Life is amazing. Lap it up!