How do I explain this one? I tried to capture some of it in the title, but I also had 5 other titles in mind that would make you think it was the worst experience in the world…

It was, in many ways, quite the opposite. It was the most spectacularly beautiful run I have ever done in my life! It was a gift of natural beauty that couldn’t have done anything but lift a weary heart.

And yet…. I was sick from the word go. Must have been something I ate last night, but my stomach was in knots and cramping for 56km. A few stops at the thankfully frequent toilets helped a little. I even threw up a bit, but managed to stand tall when I needed to. I stopped at almost every drink station, trying to neck as many Powerade tubes as I could manage. I didn’t want to drop or cramp because of a rookie error, like running low on salts. I got dizzy a few times, but pulled myself together at all the right moments.

What a poignant time to have put up the last post with Michael Milton’s letter?! I thought about it over and over, asking myself the question he posed. When is it time to stop? When is the answer, “no more”?

Not today my friends. Not today…

I aimed for under 5 hours and finished in 5:27.44. I was annoyed at going over the 4 hour mark when the 42km was complete, but I was only 5 minutes off and had to remind myself that today was not about time. Today was about being part of one of the most extraordinary runs available on our planet – because of the scenery, the camaraderie, the organisation and the support. Today was about getting in my head, finding that little voice that is calling out to me in soothing, devilish tones, telling me it’s “ok to stop dude…no one will think less of you, you’ve done a great job…it’s ok my man…” and bludgeoning it with a sledge hammer!

Because who the hell knows when it’s really that time? Ok, if I pass out, then it’s because I couldn’t keep my mind overriding my body’s signals. That’s cool, I can’t always stop that from happening. But in the meantime, while I am conscious, I am in control and I will decide when to stop. That little guy in your head is always going to give you lip, but he’s a pussy and couldn’t even defend himself from a random sledge hammer bludgeoning.. And that’s all I have to say about that…

I’m not done telling you about this race, but I wanted to post something before I went and got drunk, because you won’t hear from me for a day or so. I’m tired, emotional and ready to write myself off in Cape Town. Please don’t think less of me, but sometimes you just gotta cut loose..

Before I go, I am going to list just a few of the amazing people I met today and write more about them later:

There’s more, but I’m going to have to watch the videos. I just can’t tell you how awesome and supportive everyone was.

And the video for Bratislava is complete and just waiting for me to find a fast enough connection speed. The Two Oceans one will make you laugh and cry.. I hope…

I love you all and can’t believe we just clicked over 3500 fans… Check it: facebook.com/RunLikeCrazy (we even have our own special URL now!)

Bone Daddy from Africa, the land of the amazing! 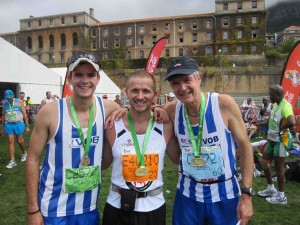