What a fun day!?! Doesn’t matter how many times you run a marathon, every one of them offers up a new challenge and a few great stories. The Bratislava Marathon is pretty new, only 5 years old, but these guys have really got their heads screwed on right, so each year it’s growing by 30 or 40%. This year there were over 3000 runners in the different categories. It starts in the city and runs through town for a while, then you pass under the castle and head out over the main bridge with the cool UFO restaurant on top. They shut down half the bridge and the highway for the runners, so it feels safe and spacious. After running out through the new part of town, Petržalka (which is all kinda communist era buildings), you turn off onto some really lovely parkland near the the river Danube and run back into the city to start lap 2. 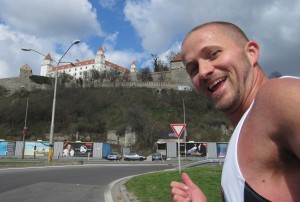 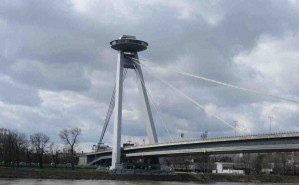 Today I met about a dozen runners who all had better stories than me. These guys were all strong runners and really cool people, with running histories that stretch back to my childhood.

I met Steve Edwards from Gloucestershire before the race, who was running his 498th marathon, aiming to have number 500 come up in 2 weeks time. He’d even broken the world record back in 1992 when he ran more registered marathons in a year than had previously been achieved, with 87 races across the UK and Europe. He was a super nice guy too and I was proud to meet him. 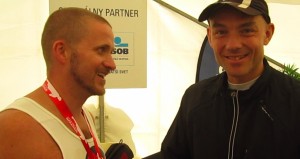 I got going and ran from the back, looking for a pace maker to get me in around 3:30. I’d decided to keep my run pretty slow and make sure that I got through without injury. I ran past a lot of runners looking for the pacers, sitting in next to them after about 2kms. By 2.5kms I was bored and sped up.  I guess, in the end, I’m always going to run my own race, so sitting so close to a pacer just made me a little uncomfortable. So I pushed on and took in the sites of a picturesque town, about to be blessed with Spring.

I sidled up next to a fella with a backpack on, intrigued to see what he was training for.  Brian Lang was a Canadian, who was doing his final preparation run for the ultra tough Marathon Des Sables (250km across the Sahara carrying all your own supplies kinda tough!). He ran the whole thing with the  backpack and still finished a little over 3:30. What I couldn’t believe was that the Marathon Des Sables starts at the end of this week! He’s leaving Tuesday! What an animal!?! On top of that, he’d been really sick this year and was coughing up a little blood on the run today. Yet he still looked determined and strong. With 4 kids under 7, I just couldn’t fathom how tough Brian must be to juggle it all.

I also met Michael and Ernst from Austria, while running below the beautiful hilltop castle above Bratislava. Michael had seen me on stage the day before and loved the concept. Both men had previously been seriously overweight, with Ernst even weighing in at 107kg at one point. Now Ernst was running his 12th marathon and Michael was running his 159th! Michael had even run 3 of them under 2:30! These guys loved my story because they could relate to it. They were both running for Red Cross and had been for some years.

A couple of guys doing the half started rapping to me too. They called themselves MC Pepsi Up and MC Pepsi Down… I got some footage and told them to look out for it on the website. I explained that the RunLikeCrazy name represented my mission, to run marathons all over the world. One fella shouted, “Hey! My Mum told me about you!” Awesome man, I said, I love your Mum! “Whoah buddy”, he responded, not liking where I was headed with his Mum.. It was about then I took off, thinking maybe my choice of words could have been better, haha. The weather was good and the fields around us were green, so it was all pretty pleasant running out there. Further along I came across Branislav, a cool local guy who I ran with for about 7 kms. He was running the half marathon and he was going pretty fast, but looked a little tired. He told me that he’d been playing hockey all morning before he came to compete. No wonder he was buggered! Really nice guy though and a pleasure to get to know. 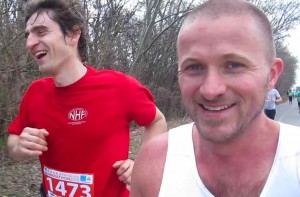 As I came into town again, I saw Daz a few times waving the Boxing Kangaroo Flag. He tried to find a costume here, but it proved pretty difficult and potentially very expensive. I love seeing him dress up like a tool, but at the same time, I’m just stoked that someone is out here cheering for me. He’s been completely what I needed on these runs so many times. And Daz was loving being in a place where there are just SOOO many hot women! Plenty to look at while I’m running about like  a crazy bastard. And I thought about all my good mates in TriBal (my triathlon and running club back home) who had participated in the IronMan in Port Macquarie, Australia, that same day. They’d endured so much to achieve their goals and I was just so happy to be part of such a fantastically motivated and supportive club. 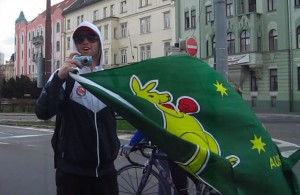 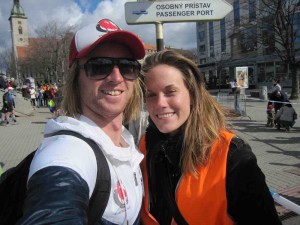 I entered the second lap and started chatting to Doug, the Scotsman from Glasgow who was over here running marathon number 20. I thought about it and realised that this was my 19th registered marathon in my running career, but if I counted the Comrades ultra last year, then it was number 20 for me too. He was a really good hearted guy who made a few jokes and told me how his friend was supposed to be there with him, but had fallen on his face during the week. 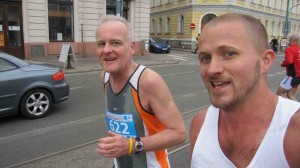 I ran with all these guys a couple of times, moving from one runner to another as we passed water stops. I forget that just saying hi to someone on these races, or giving a few words of encouragement, can turn into fascinating conversations that both teach you a fantastic lesson, but also introduce you to a worthy new friend. There’s just something about that cameraderie that makes the marathon such a special event. I’ve done myself a disservice in a few of these runs by going too fast and not taking the time to listen to these stories. They make me realise again and again that everyone has a unique story, with twists and turns in their lives that have drawn them into the quest to run 1, 2o or 500 marathons!

Even 1 is a remarkable achievement, because every time you run 42 kilometers you learn that your mind is the most amazing tool humans possess. It allows you to decide to keep going when everything else is telling you to stop. Your will power and your ability to embrace pain and push through it to achieve your goals is a fundamental lesson in taking control of your life.

Put simply: Go for a run, unlock your dreams!

I was running with Brian the Canadian again at about the 35km mark. He told me that I looked good, so should step it up a bit. I had to admit, I was feeling pretty good, but was in danger of missing my 3:30 target for the day by about 2 minutes. I wished him all the best decided to speed up. It was business time.. Ha! I found myself cruising pretty easily at around 4:25 per kilometer, which would give me the 2 minutes back I needed. It also meant that I wasn’t taking this marathon too easy and I was getting a little speed training in. That was all very nice until I hit an area that was basically a damn wind tunnel, so all of a sudden I was working twice as hard  just to keep it close to 4:30 per km. But I persisted and even moaned a little as I kept up the speed.

“The chips are down again mate, but now’s the time to punch through the pain!”

Haha, it never ceases to amaze me the crap I say out loud to myself while I’m in the last 5 kms. Yet I’m always so receptive! I gotta start recording this stuff so I can play it to myself when I’m at the gym or heading to work…

Well, I came over the last bridge and ran into town, dance tunes blaring from big speakers, supporters waving and shouting for everyone. I felt good and passed a whole lot of people to bring it home in style. I thought about all the amazing people that had jumped on the Facebook Fan Page, growing the numbers this week by nearly 600%. They’d left so many comments about how awesome this was and how inspired they are. I’m so honored to provide that for people. We may even get a sponsor after all! If all those people just invite 3 more friends, then the audience will be hard for sponsors to ignore!

Also as the audience grows, inevitably more people get excited and donate to UNICEF too – which in the end will be my greatest achievement, raising money for kids that don’t have the opportunities that I have had. We’ve had some big donations this week and I want to thank you all for spreading the word.

I finished the run solidly in 3:28.56 on my watch – though the official time on the site is 3:30.15. That’s ok, I’m happy with that result and very glad to have come here and enjoyed this beautiful city and an emerging race. I recommend everyone come try it out if they get a chance. It was a great experience for me. Thanks to Jozef and the rest of the organisers of the race for giving me such a warm welcome. I hope I get to come back and be part of the race again. 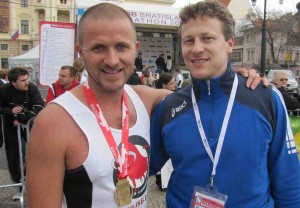 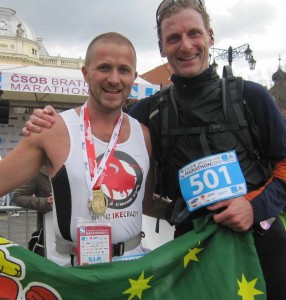 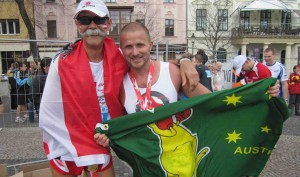 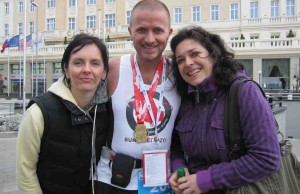 Cheers again to everyone for your unwavering support. You make it all worthwhile. My toughest challenge yet is next Saturday – the famous Cape Town Two Oceans Marathon. It’s 56km and runs between the Atlantic and Indian oceans! It’s going to be HUGE! 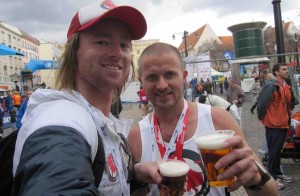