There are a few Australian names that automatically come to mind when you start talking about marathons and distance running. Rob de Castella is one… Cliffy Young another… even Craig Mottram as the new kid on the block.

But Steve Moneghetti trumps all these names. Not necessarily because he is the best of them (though most would say he is), but because he has been so consistently a massive part of Australia’s running scene for 2 decades. And he is an extraordinary ambassador for Aussie sports too, getting involved in both Commonwealth and Olympic games post competition.

Anyway, the big man himself has sent us an email of encouragement…. I gotta say, the fact that he even knows about it is enough to get me excited. That he took the time to write something…. well…. I love you Mona! 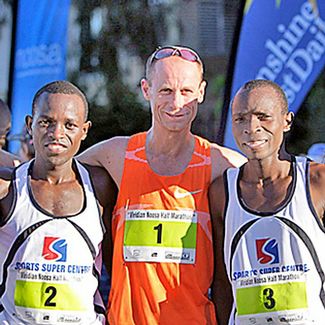 Wow, what a huge challenge you are undertaking – I thought two marathons a year was tough enough. At least you will get to see some lovely parts of the world on your marathon journey.

I commend you for taking on the challenge and hope you don’t run into too many “brick walls” along the way.