The first leg of my four run journey was completed on Saturday with the Vietnam mountain marathon. It was a 7 hour 57 minute battle! However I finished 16th out of over 70 starters and the winner clocked in at 5:37. This course had almost everything: clay, mud, dirt, concrete, rocks, waterfall crossings, tip-toeing between rice fields, jungle, heat, humidity, rain, sunshine, a bit of altitude, wild dogs, buffaloes and hills… heaps and heaps of steep uphills and downhill technical sections. I certainly felt my training was lacking for this type of terrain!

This was a very well run event set in one of the most beautiful places I’ve ever seen, high in the hills of Northern Vietnam near the Chinese border. All the competitors met in Hanoi and take the overnight train to Lao Cai, and then transfer to either the Eco lodge in the mountains or Sapa town for their accommodation. I was lucky enough to get a tent with a view at the ecolodge!

At the pre-race briefing the director mentioned that there was an additional hill – which had all of us runners a bit worried. The hill had been added to make this the hardest course the director could manage – it was a 2.5km, a 10% gradient killer at the 34km mark with sections that had ropes to help keep runners upright so they did not slip down the mountain! Fun times. This was quiet a concern, however spirits were still high and the group of runners participating were diverse, fun and supportive – coming from some 40 different countries. 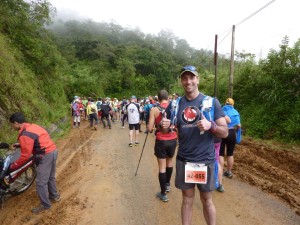 Race day came along and I felt reasonably comfortable and well prepared for what was to come (even wearing my trail shoes for only the 3rd time!). By the first checkpoint, after taking a couple of dives, passing the local rubbish tip, navigating the toughest jungle section and covering 14km in around 2.5 hours – I realised this was going to be a very long day. Nevertheless, onwards and upwards I pressed on to the second checkpoint at the half marathon start only encountering a small delay with a herd of local buffaloes blocking our path momentarily…. I think they were attracted to the RLC bull on my shirt!! Who could blame them 😉

From the 20 to 34km mark there was 5km of climbing and 8km descending, both at steep gradients and then the sun magically appeared and turned up the heat. My legs and lungs felt okay – however my heart rate had been very high for a while and I was radiating heat excessively without cooling down. I chose to sit in the shade at the checkpoint and guzzle as much water as possible and the volunteers kept a good eye on me. After about 30 mins, I cooled down a bit and was up and moving again; however still very conscious of my consistently high heart rate. 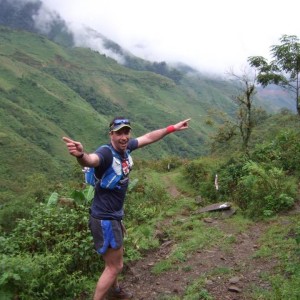 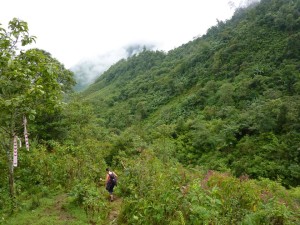 The next 2.5km was the steepest section I have ever encountered…. not helpful for keeping the heart in check! A downhill 4km section on a 4WD track followed and just as I made it to the road back to the ecolodge and finish line, I was randomly interviewed by Vietnam TV somewhat inconveniently as all I wanted to do was get the job done for the last 2km. 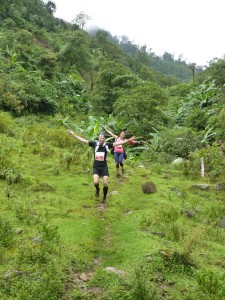 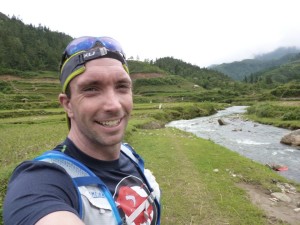 I have spoken a lot about how difficult this race was, but I should say that I must’ve experienced at least a dozen “how good is this?” and “how lucky am I to be doing this?” moments throughout the run. Despite the incredibly serious challenge that I faced, I always thought that I was just going for a run in a magical spot in the world and through communities much less fortunate than myself. This humbling feeling certainly helped me through the event.

Final note, I’d definitely recommend this event to anyone who is up for a real challenge. 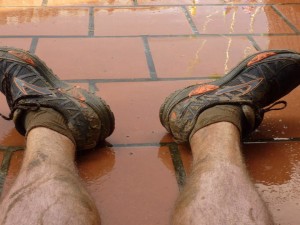 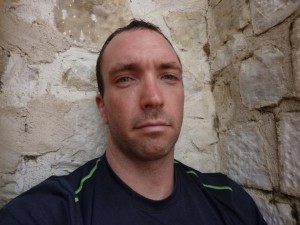 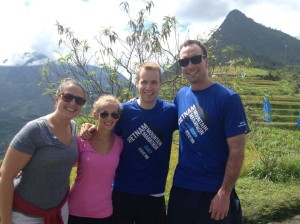 Just a few more weeks until the Khao Yai trail marathon in Thailand!