Well, that’s 12 down and only 40 left… I groaned as I wrote that. I do believe I perform much better under pressure or with my mates. Today there was no pressure and no buddies to impress, so it turned into 21kms of running with a new friend and 21kms of hoping I wouldn’t fall on my face.

Cyprus is a really beautiful find. I’d heard it was an underrated place, but being here, I feel it’s beyond that. It’s a bit of an English beach resort, with many of the stores and restaurants catering directly to the Brits. The roads are even left hand drive, like back in England and home in Australia. You could be mistaken for thinking it was a tourist thing, but the fact is the island was under British control until 1964, so it’s not too surprising.

But it’s always the people that make a place. The Cypriots (by this I mean the Greek Cypriots) are an easy going and generous people. Their hospitality is well known, but in their presence you feel welcome and at ease. Unlike some of the Greek islands and some places in nearby Turkey, I haven’t felt like I was being harassed or sold to. Apparently the rise in real estate prices around the island has created a lot of new wealth, so people aren’t struggling for a dollar. On top of that, they’re protected by sea, so they don’t have too many migrants from neighbouring regions showing up to tug at the tourist purse strings.

The real estate boom is easy to understand too. The countryside is lush and beautiful and it seems to me that Cyprus is the first place in Europe to see Spring this year. Running through the countryside, I could breathe Spring in… every breath caught the fragrances of pine trees and budding flowers. Birds were twittering, bees buzzing. I always need something to take my mind away from my pain and today it was the emergence of a new season.

The run started out at Petra Tou Rominou, apparently the birthplace of Aphrodite. The course basically following the coast back into Pafos, with a couple of kickbacks to the airport, etc. The bus dropped us out there at 7:45am, so we had 45 mins to the 8:30am start. I took a minute to walk over to the cliff above the Mediterranean, looking out to the rock where Aphrodite had “chosen” to be born. Good choice by her, I’d say. Pretty stunning place. 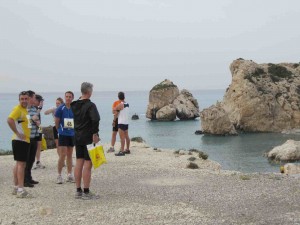 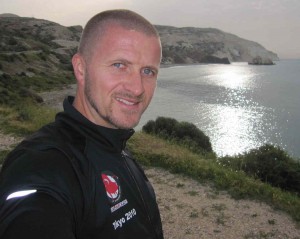 I spoke to a few different runners, meeting Susanne and Willi, two Austrians who’d come for the event. Susanne told me she’d emailed me some months ago, knowing I was coming, but I didn’t answer… I was ashamed, because I don’t remember seeing the email among all the messages we get. She’d been watching my adventure for a while and I was happy to hear we’d be running again in Helsinki. They were planning to run 14 marathons this year. I asked if they ran that many every year, but Susanne said no, last year they only did 12… hmmm. OK. 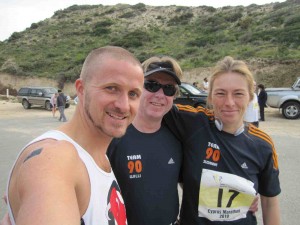 I also met a girl that had hit me up on the Facebook fan page. Her name is Jess and she’s in the US army, operating in a peace-keeping force in Egypt. Her challenge this week is to run 100 miles in a week, top and tailing it with the Cyprus Marathon and Rome Marathon. This means she’s still got some serious distance to cover during the week too.

And I chatted with some really nice English fellas. Steve is a 51 year old, who smashed an Iron Man last year for his 50th. Something about Iron Men…they just look tough. He was pumped for the run, though it sounded like he’d be happy with anything under 4 hours. David was another fella, looking pretty fit and ready to go the distance. 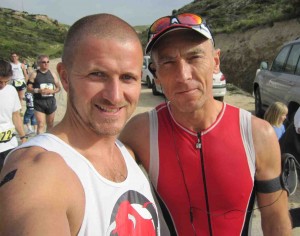 I even met a cool Cypriot guy, who enjoyed hearing my story. His name was Panicos, or Panic. When he stripped down to his race kit, I judged that he was here to win this bad boy.

The start was a funny affair, with everyone just crowding around the start, next to the road. The marshal counted down and the small band of runners (about 70) took off with a bit of a hoot. The run starts with a hill, so the group spread out quickly. I ran up the hill looking for someone to step in with and found Jess mixing it up with the boys in the front. She confidently told me she was going to run 3:30. I noted she didn’t have any kind of watch and asked her how she would time it, but she brushed it off by saying that she just knew distance and speed. The greatest runners seem unconcerned with timing, so I had to respect her immediately. 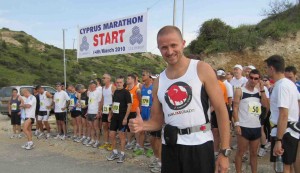 We set a pretty solid pace, punching out each kilometre in under 5 mins. Jess was pacing me, not the other way, so I was impressed to see that she was bang on track, posting each km in about 4.58. We shared a few stories and I was shocked to hear that Jess did all her training on her army base. They only had a 2 mile track in the compound and she was often doing 10 laps to get up the distance. Amazing work in the heat of Egypt. She even told me she’d been in Israel for the Tiberias marathon when I was there. Seemed like our paths would keep crossing. Her husband and her used their leave for the dual purposes of site-seeing and giving Jess the opportunity to knock out marathons. Great way to travel! 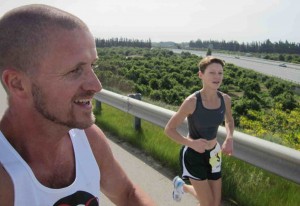 We started to pickup some runners after 10km. We were going at a pretty steady pace, but the sun was biting by 9:30am, so I was feeling it. I knew I wouldn’t be able to hold the pace, but figured I’d make the most of a solid race mate. She basically pulled me to 18kms, then while Jess took a quick pit stop, I began to count the runners heading the other way at the airport turnaround. I was impressed to see that we were in 17th place overall and that Jess was first female by a good way. By 19km she’d caught me again and I had to tell her to keep cruising, because I wouldn’t be able to hold this pace. She pushed on, looking fleet of foot and totally unperturbed by the heat.

But I’d found the wall early.  As I came to the halfway mark, I realised that today was going to be a slog and there was no way it would get better. I walked a little, dumped a GU and hoped that my body would find some sort of rhythm again. I’d been here before though. I’d felt this way in Egypt and Israel. I’d loaded some luggage on a trailer and was gonna have to tow it all the way home. Ah well, thems the breaks.

The next 10kms was a combination of targeting runners to try to catch and dodging cars. We were running along one of the main roads, so cars were constantly dodging us.  I must admit, I felt kinda unprotected out there. 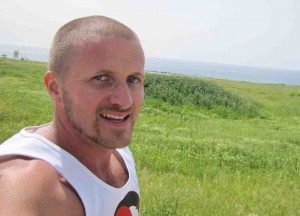 I passed 30kms as I ran into Pafos’ town centre. As I came up a little hill, I was greeted by an amazing site on a push bike. Maybe it was the sun in my eyes, but I’m certain I heard angels singing as a fella that looked very much like the famous Cypriot tennis star, Marcos Bagdhatis, cruised over to me and asked me if I was feeling ok. It took me a minute to realise that his accent wasn’t quite right, but apart from that he was the spitting image of Bagdhatis. Daz had done an extraordinary wardrobe change, hired a bike and come to keep me company. The last time he’d done this was in Egypt, pulling alongside me when I needed him most. Now he’d done it again, giving me a pep talk and egging me on, when all I really wanted to do was throw up. 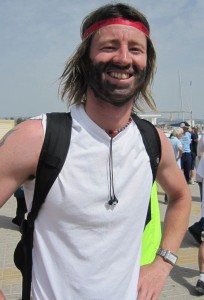 We kept moving past the 32, 34, 35km marks. Whenever it got too much, I’d stop for a drink and a walk, looking to my left and taking in the fields of blooming flowers and greenery. Just gorgeous. Only 7kms to go. I had one final detour, so Daz left me to it and headed back toward the end. As I hit the final turnaround, I slowed again to take in some water. Within seconds I had, Iron Man Steve, cruising past me, looking fit and strong. “C’mon Tristan”, he hollered, “let’s get on with it mate!” Bloody hell, I thought, this guy’s a machine! 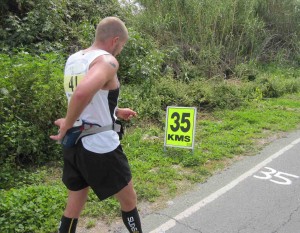 I took the opportunity to latch on though, hooking up a tow line to Steve and following him into the last 5kms. He had a steady pace and was clearly not going to slow till it was done. I counted down the kms and started having some pretty emotional conversations with myself….

“Keep going Tris, you’ve been here before. You know it can only end one way.”

“C’mon you weak bastard, you’re a GODDAMN MACHINE! Stop pissing about and RUN!”

“I love you man, you’re everything you need to be, just keep going, just keep moving.”

Yeah, yeah, you try running 12 marathons in 11 weeks and tell me you don’t get weird on yourself..

Then I saw 40km. I let out a sigh. I was gonna get there. I felt ok now, even running a little stronger. More people were along the roads, but mostly because it was a busy Sunday in the beach side cafes, so loads of people were walking about. They cheered us on, taking in the spectacle over breakfast. I passed 41km and felt better again.

1km left and I pushed along the boulevard, looking for the finish. Tourists covered the street, so you had to dodge and weave a little. I thought about my Cypriot mates back home. Ilias, the body builder. The Andrews family; Anne and Andrew, Simon, Jordan, Josh and of course, my very great friend Tristan. I wished he could be here with me today. I tried to say it on video, but I just babbled away, fatigued and incoherent. Tristan is a strong marathon runner and the best human being I know. His family is Cypriot and I think he encompasses the spirit of this place.

Well done to Joe, the Irish winner of the race. I yelled out to him around 17km, cheering him on. He gave it right back to me, pointing at me saying, “You keep going too. I’m watching you boyo!” He won it with 2:50 and came to chat to me after. A really great guy, he told me he’d only started running 2 years before. “Keeps me out of the pub!”, he says. Bloody good excuse Joe. 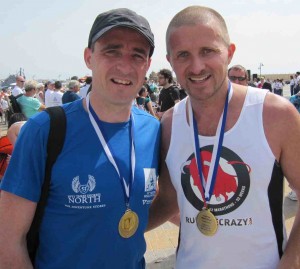 Thanks for the support everyone. Thanks to Jess for putting up with me for 20kms and congratulations on your first win! Cheers to Steve for dragging me home. Thanks to Marcos/Daz for being there too. 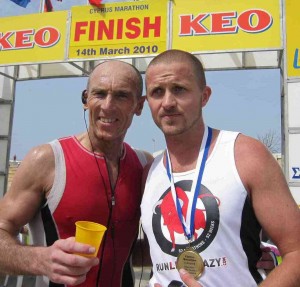 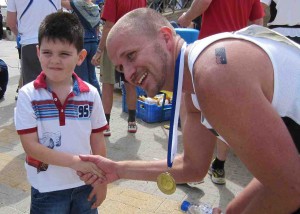 And thanks to my beautiful sister Alexis, who flew all the way from London to support us in Cyprus. Alexis ran her first 10km race since school and carried the Boxing Kangaroo flag the whole way. She nailed it in 55mins. Just brilliant work. I love you Lex. Thanks for being there when I need you most. How good’s my family?! 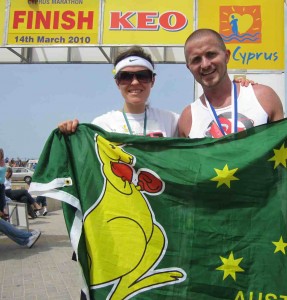 Rome Marathon next week. The raffle result is attached to this one, so look out for details in the coming days. It’s going to be crazy….but hey, that’s why you’re watching. 😉