So.. We’ve had a few hiccups organising this crazy adventure and this one really did catch me off guard.

I missed out on an entry to the Mumbai Marathon! I know, what the hell?! It really was my own fault, I tried to register a while ago, had some online registration problems and emailed the organisers for guidance. I got nothing in return and checked again later, only to find the site still not very functional – so I left it for a few weeks..

Insane… I went back this week only to find it sold out! I called them, emailed them and begged them – nothing doing. I tried looking for tours and charities, but they don’t supply tour companies with entries to this marathon..

So it’s a no go. That means both Indian marathons that I had listed are out… Ahhh well, I’ve had to find an alternative..

And what an alternative! We’re going to Dubai to run with Haile Gebrselassie and hopefully see him break his marathon world record again! If he breaks it, those awesome cashed up Arabs are going to give him $1,000,000 USD, so I reckon the motivation is just about right. 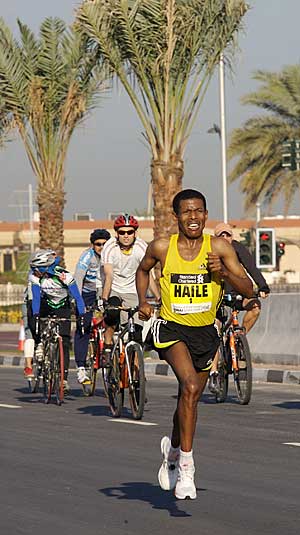 I’ve signed up and the race is on the 22nd of January, so we even have time to drop into India and watch the Mumbai Marathon. It’d be sad to completely miss India on our travels and you never know, maybe someone will help us gain entry..

Only problem is that the Las Palmas Marathon in the Canary Islands is on Sunday the 24th of January, so Daz and I are going to have to blast off real late on the night of the Dubai race and head to London to get another flight to Gran Canaria on the Saturday..

Flying straight after a race to get to another race is going to happen a few times, so it’ll be a good test….I guess….