A day for Champions..

A day for Champions.. 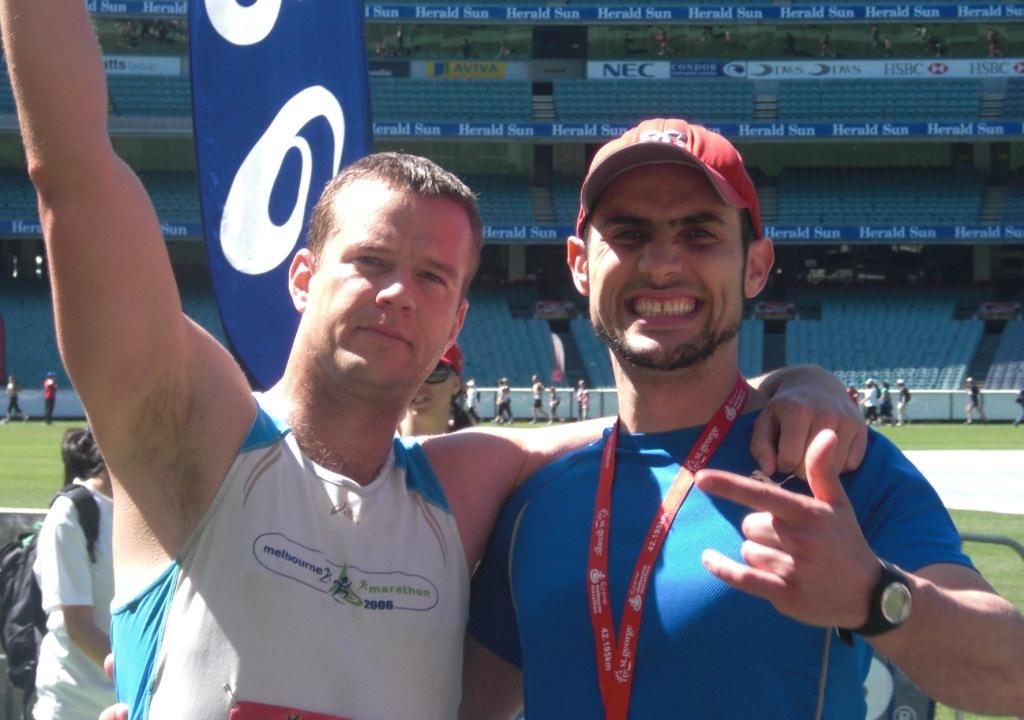 The Melbourne Marathon was on Sunday. It made me remember why I love marathons so much. This time I was a spectator though, as I had to pull the pin on this one, with my legs still giving me a little trouble and next year being a much bigger task to prepare for.

I went down to support my friends… I’m not ashamed to say that it was one of the proudest days I’ve had for a very long time. All of the guys performed out of their skin and put everything they had on the table.. It was just so inspirational to watch these men and women smash out the kms…

Scotty Nathan pounded out a magnificent effort, even though his lead up was not ideal, with an awesome 3:21:47. Shane “Yabby” Campbell had the elements catch up with him, but still managed a 3:11:23. Mossy and McGrath had great races and big Pete Lockyer smashed 2:54 with Brian.

I won’t talk about everyone, but I do have a few further mentions here. They highlight the magnificent diversity that encompasses marathon running as a whole. Three men that are all very close mates took to the track. I consider all three of these guys my brothers, so I had to be there to see their heroics.

Nic Marie – aka the Cougar, is a running machine that has previously been mentioned on this site. In short the Cougar had the perfect race. He stuck to his plan, ran beautifully for 35kms and dropped the hammer to come home in 3:06:54. That’s a 5 minute PB and more than a minute under target. And I’m telling you, he looked like he could do it again. He’s the epitome of training perfectly to a program and the race plan being executed flawlessly. The conditions were great, but he’d done all the work and got a great result. That’s how you run a marathon.

Tristan Andrews – my old school buddy and basically the best overall human being I know. One of those fellas that you spend your life wishing you were as nice as him… He is the father of a little hero that I’m proud to call my Godson, Atticus Andrews, and his beautiful partner Sophie is expecting their second. With all that going on, Tristan has found the time to fit marathon training into working his butt off. He has been doing less running this time round (this is his 3rd Melbourne Marathon) and more core strengthening and general fitness. But he managed to do the kms on his weekends when little Atty had his nap and somehow got through a decent training program that had him on the start line on the day. Tristan is known for his tenacity and single-mindedness, so there was no doubt he had the mental game won, but to be able to fit all that training in, hit the track and smash that run takes a lotta guts and determination anyway. And he did it in style with a solid 3:41:39. That’s a PB and only 2mins off my time from last year and I did HEAPS of training… He didn’t look like he was struggling either, as I watched him stomp down St Kilda Road with only 3kms to go. Top effort my friend, what a way to celebrate your 33rd birthday!

Nick Hakes – another old school buddy, my long time flatmate and Atticus’ other Godfather. Now it’s fair to say that Nick was a little under-cooked for this adventure.. He’d had a huge few weeks, with work commitments, a birthday holiday and a number of other speed humps.. He’d managed to fit in some of the long runs with Tristan and a number of shorter runs during the week. Even with that training, he probably wasn’t ready on the day. But true to Nick’s stubborn personality, he did it anyway. This begs the question…do you or don’t you when you’re not sure? Nick had done a marathon previously and broke 4 hours in his first effort. He had the basic fitness to do it and the mental battle was never an issue. Basically, Nicko smashed this one on mental toughness alone. It takes all kinds of motivation to get through 42kms, which is doubly painful when you haven’t done enough training and even worse still when you have to stay out there for so long.. And yet…. he nailed it anyway in 4:14:29 and only copped a monster blister as a result… You’re a Man Mountain Nicholas!